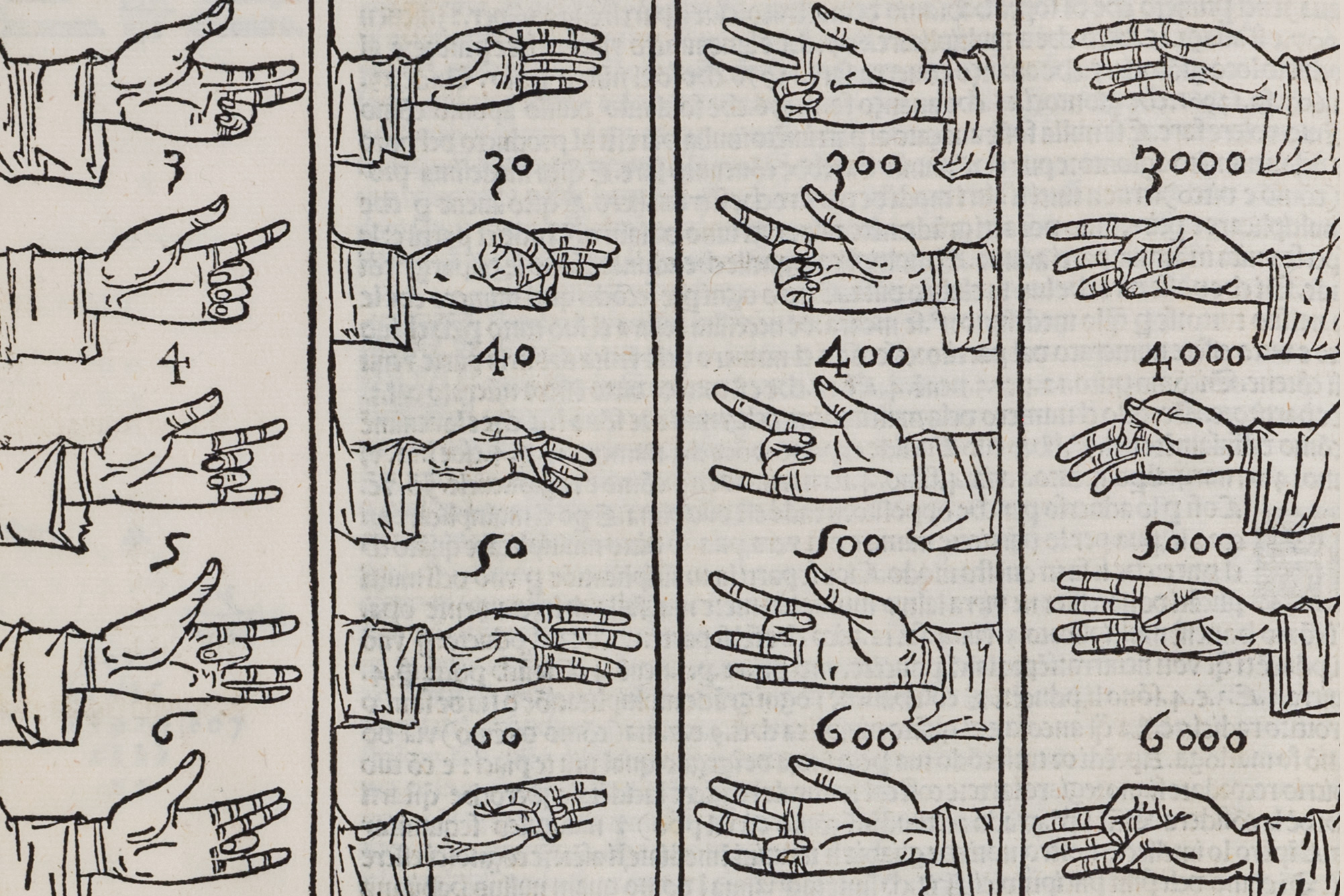 20th November 1494, Venice
The Summa, by Luca Pacioli – a revolutionary, new book especially demanding for its scientific nature – comes to form the printing presses of an illustrious typographer, with over 10 years of activity.

Paganino de’ Paganini was originally from Brescia but Venetian by heart. He resided in the parish of S. Salvatore, in Calle delle Ballotte in the printers’ quarters, and married the daughter of another notorious typographer, Francesco Della Fontana, active in Venice since 1471. Paganino knew well how to print books. His vast book production was mainly focused on religious and academic ones, as they were part of two stable markets, and he had an excellent relationship with the universities. He was not afraid of great deeds, in April 1495 (only 4 months after the publication of the Summa) he printed the great Bible in 4 volumes with the comments of Niccolò da Lira: a majestic work of 1571 pages, surely the most impressive European incunabulum and the first to have comments in the text. 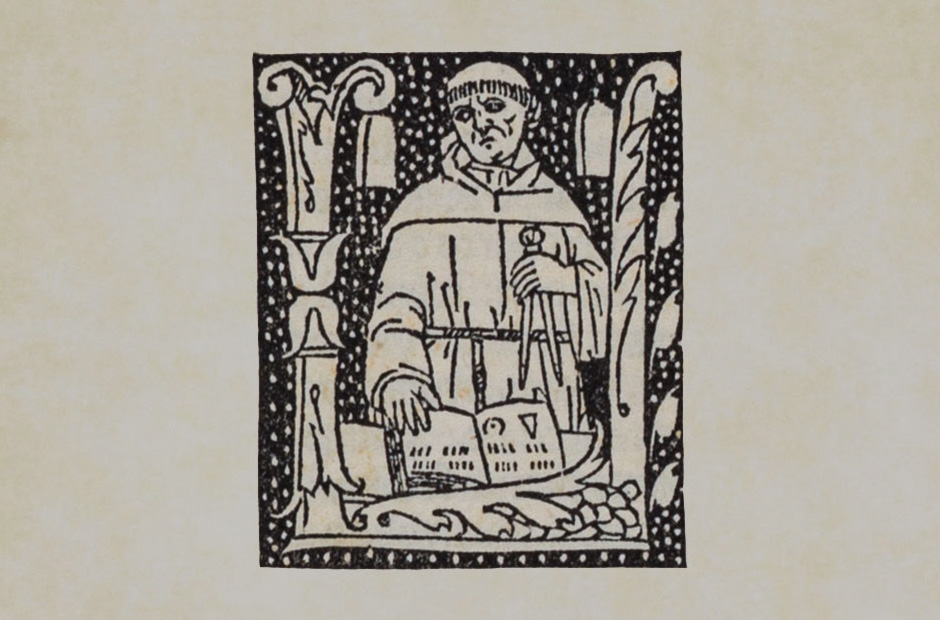 Pacioli and his editor met in Venice, in a city familiar to Luca. After the first period of training in the Tuscany – he was born in Borgo Sansepolcro around 1446-’48 – Pacioli moved to Venice at the service of Antonio Rompiasi, a merchant at the Giudecca, taking care of the education of the merchant’s children. Educator and soon to be merchant: this was the first training and real vocation of Pacioli, a vocation that shines through the whole Summa. 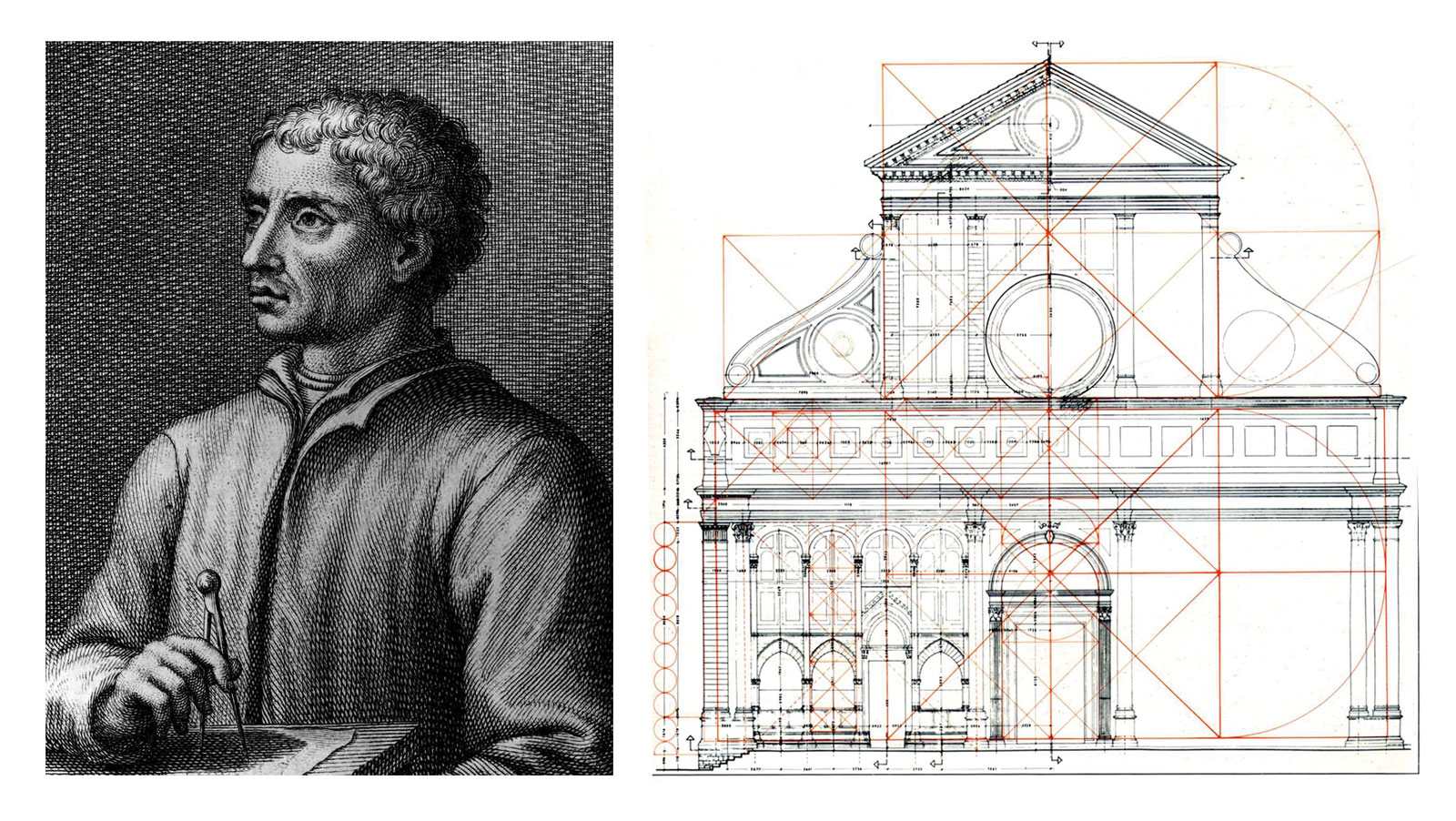 He started writing the Summa around 1487-88, but it was probably a work that he always had in mind somewhat since 1470-71 when in Rome he met his true mentor and inspiration: Leon Battista Alberti. They lived in the same house for almost two years, sharing the same passion for geometry and the ludi matematici. Surely it was Alberti to direct him towards a teaching career.

The Summa is also the outcome of several years of teaching assignments, as in Perugia, but also in other parts of Italy and abroad: Zara, Naples, Rome, Padua and then Venice, where, in 1494, he was concentrated on the printing of the Summa.

Venice, the city of printers, was the only place where he would have found the technical skills necessary print his masterpiece, the result of years of study, teaching, but also of a great commercial practice carried out around the peninsula. The Summa, beyond its majestic nature with over 600 dense pages of rigorous mathematical arguments, is above all a practical book, a work dedicated to all the merchants, for its content and language. 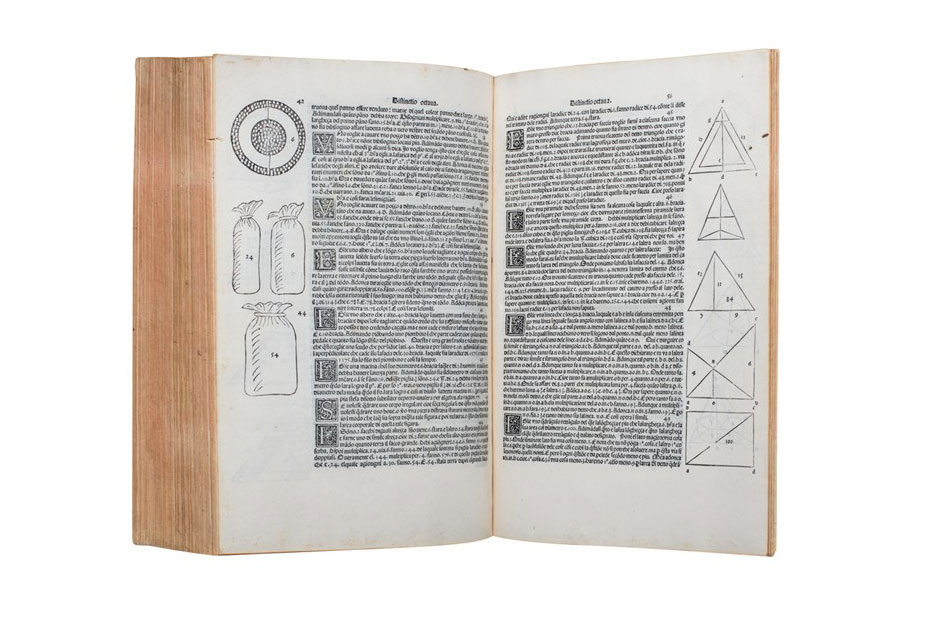 Pacioli knew Latin, however, he decided in agreement with Paganino to print the book in vernacular Italian, a risky and courageous choice, especially if considering the financial implications.  Perhaps this choice limited its circulation within the Italian peninsula, but maybe his students – who came from all over Europe – already dabbled a little Italian: for this reason, the risky choice of the Italian vernacular could instead turn out to be a smart marketing operation, to double the audience of potential buyers. Indeed, the scholars and the uncultured merchants were united by the common desire to know and learn both theory and practice.

Paganino accepted the technical challenge to print a volume, whose pages presented unprecedented levels of difficulty. He adopted a composite typographic form, made up of a central text grid and a lateral one: the margins, usually blank, are here literally invaded by calculations, mathematical operations, theorems, proofs, geometric figures, solids, polyhedra, projection and drawings. A laborious work that, according to recent studies, engaged Paganino and his typography for about a year: twelve months to compose 308 typographic moulds, equal to 616 total pages, composing one mould a day and using two torcolieri to print the sheets. We don’t know the circulation, but for a typographic business like that – in which the labour employed and the paper undoubtedly represented the main costs – Paganino and Luca had to think outside the box: the number of surviving copies pushes us to imagine a circulation record of 2000 copies! 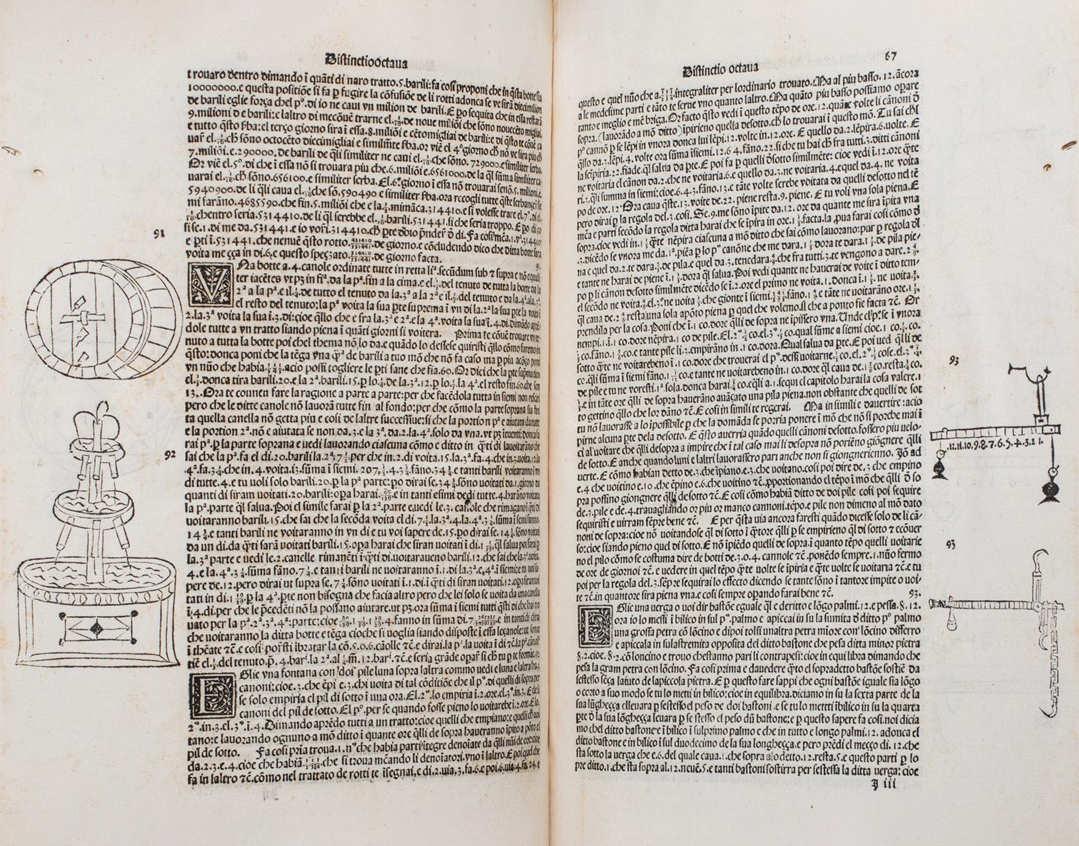 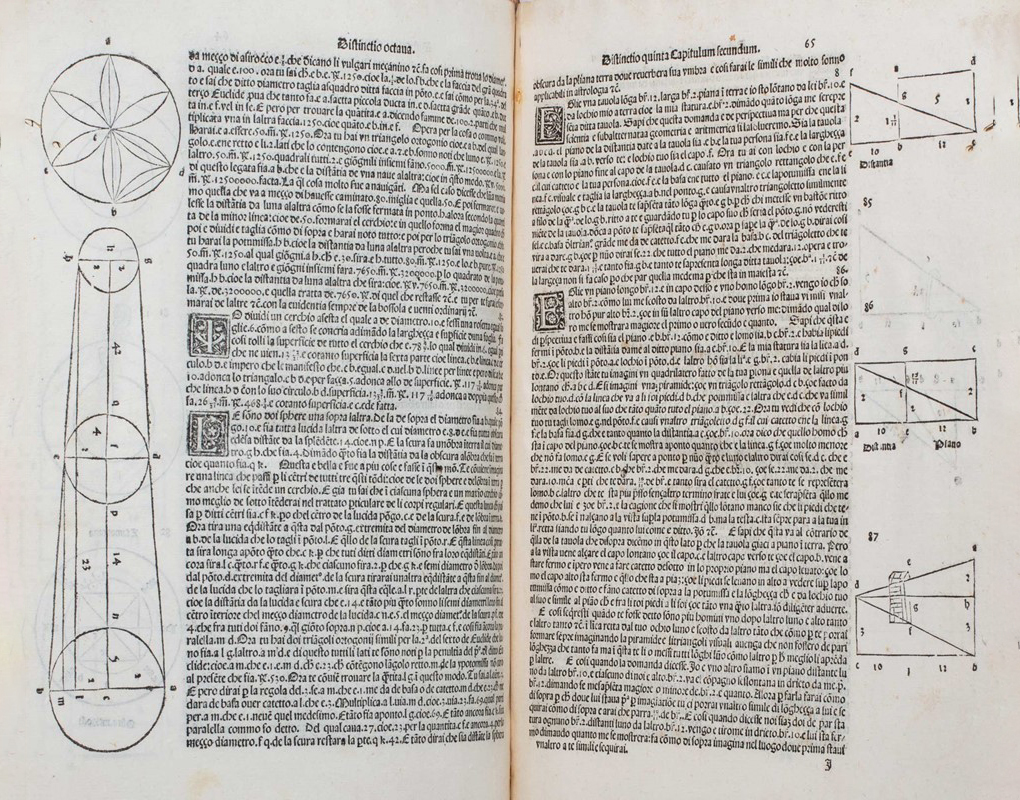 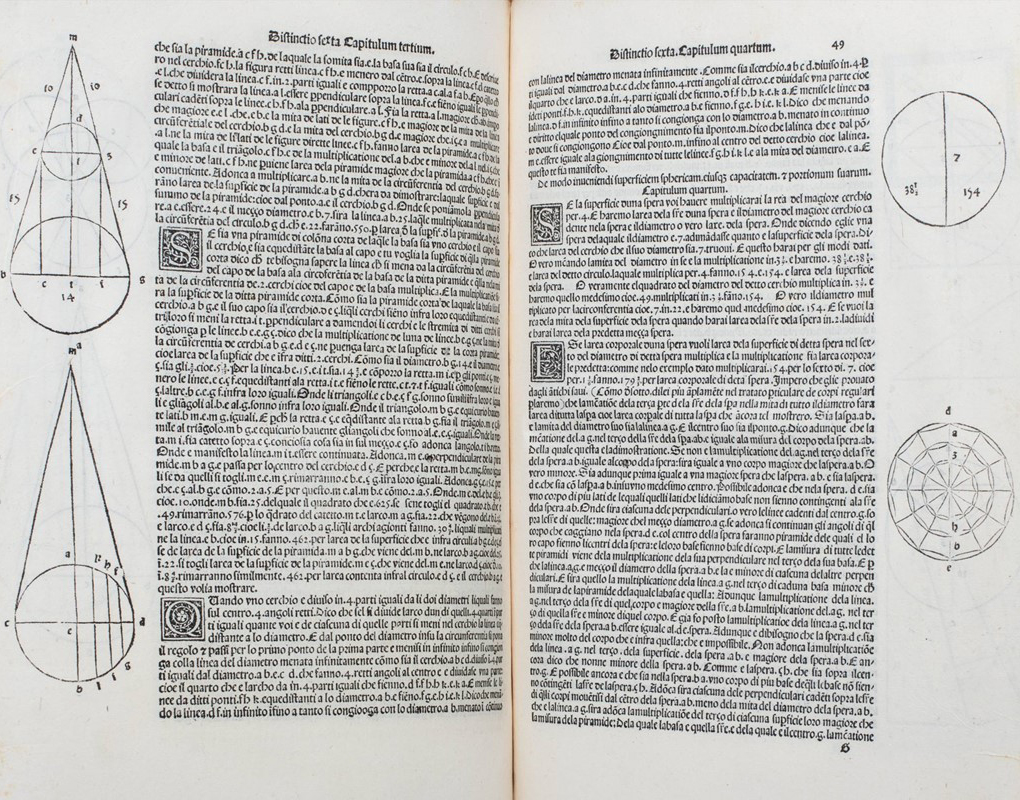 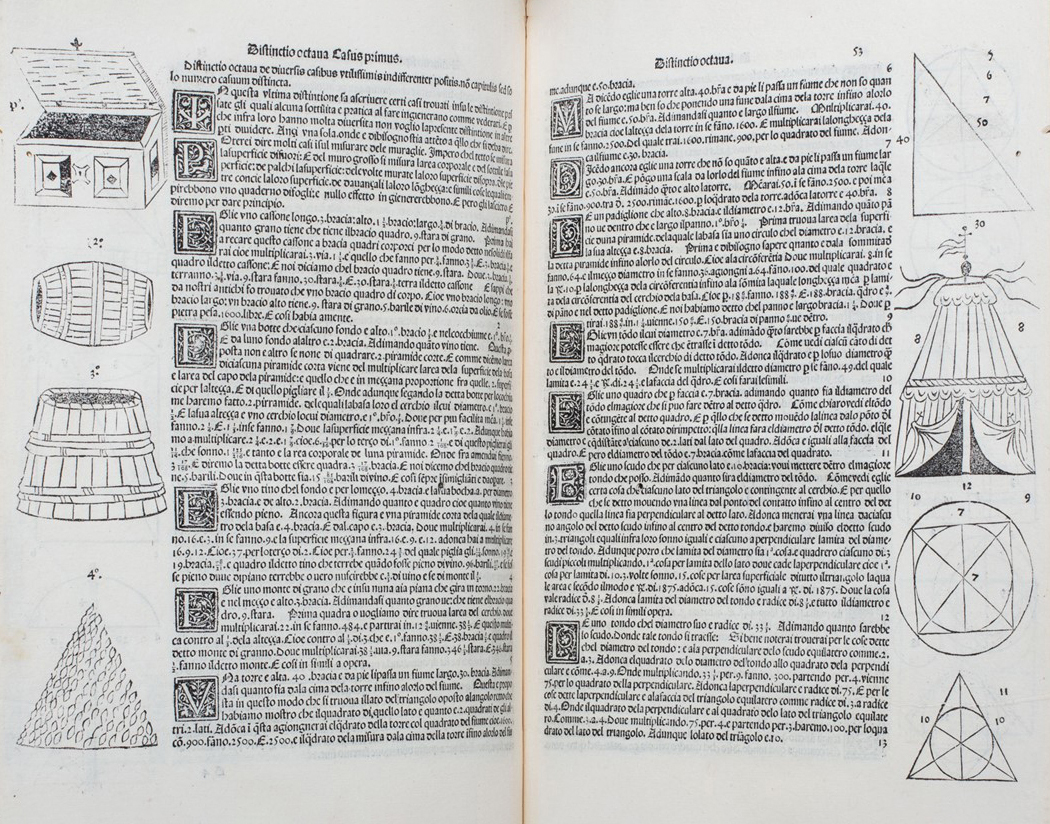 Both of them understood that it was necessary to invest in this book: by adopting vernacular  Italian as the commercial language, they were making the book accessible to an almost infinite market, much more extensive than one of the scholars and the university’ students. Therefore, even the circulation of twice the average of the time was justifiable. Time proved them right since the Summa was an incredible long seller: already in 1508, Paganino asked the Venetian Senate for a copyright’s extension to keep distributing the Summa for over twenty years, thus deciding to reprint it in 1523 at his expenses, in the same format.

The Summa was a long-awaited book, the one that the Renaissance civilization missed and necessary to demonstrate the theoretical foundation of thought of its time: that rule of the “divine” proportion that informs all the reality, through all its different forms, and is based on the universal rules of mathematics. All the ancient thought, from Euclid to Archimedes, all the medieval tradition, from Boethius to Fibonacci, all the humanistic studies, from Piero della Francesca to Leon Battista Alberti converged towards a single moment in history, that of the 20th November 1494 when the Summa was released to the general public as an immense and kaleidoscopic container of scientific knowledge in all its forms, ready to inspire the brightest minds for centuries.

The first one to enjoy the book was a new friend of Luca Pacioli, his fellow citizen Leonardo da Vinci, whom he met in Milan in 1496.

Pacioli went to Milan, on the wave of the success of the Summa and invited by Ludovico Sforza, who wanted to meet in person the mathematical monk in his illustrious Universitas. Ludovico also invited Leonardo to court, but with very different, more practical, intentions as a military engineer and musician (he presented, on behalf of Lorenzo the Magnificent, his project of a silver Lira that he will play at the Moro ). Leonardo was fascinated by the personality and knowledge of Pacioli, even though until their meeting he ignored mathematics and applied geometry since as an “omo senza lettere” he was unable to deepen his studies on the topic as he did not know Latin.

Leonardo already knew that book very well: from a note of the Atlantic Code he declared to have purchased a copy for 119 ducats! A high expense for his finances, which testifies with even greater vigour the preciousness and centrality of the Summa in Leonardo’s education. Luca and Leonardo worked together in Milan on unknown projects – except for the beautiful drawings by Leonardo that adorn his De Divina Proportione. However, Pacioli’s words and lesson profoundly influenced the mathematical and scientific thought of Leonardo. The Summa is as a text open to the future, especially for its variegated and multifaceted lessons that lived beyond time and space: an entire economic civilization was founded on the XI treatise of the Double-entry Bookkeeping System and the many reflections of corporate law, management and economic analysis and of business administration, that Pacioli was able to condense and explain in these papers admirably. 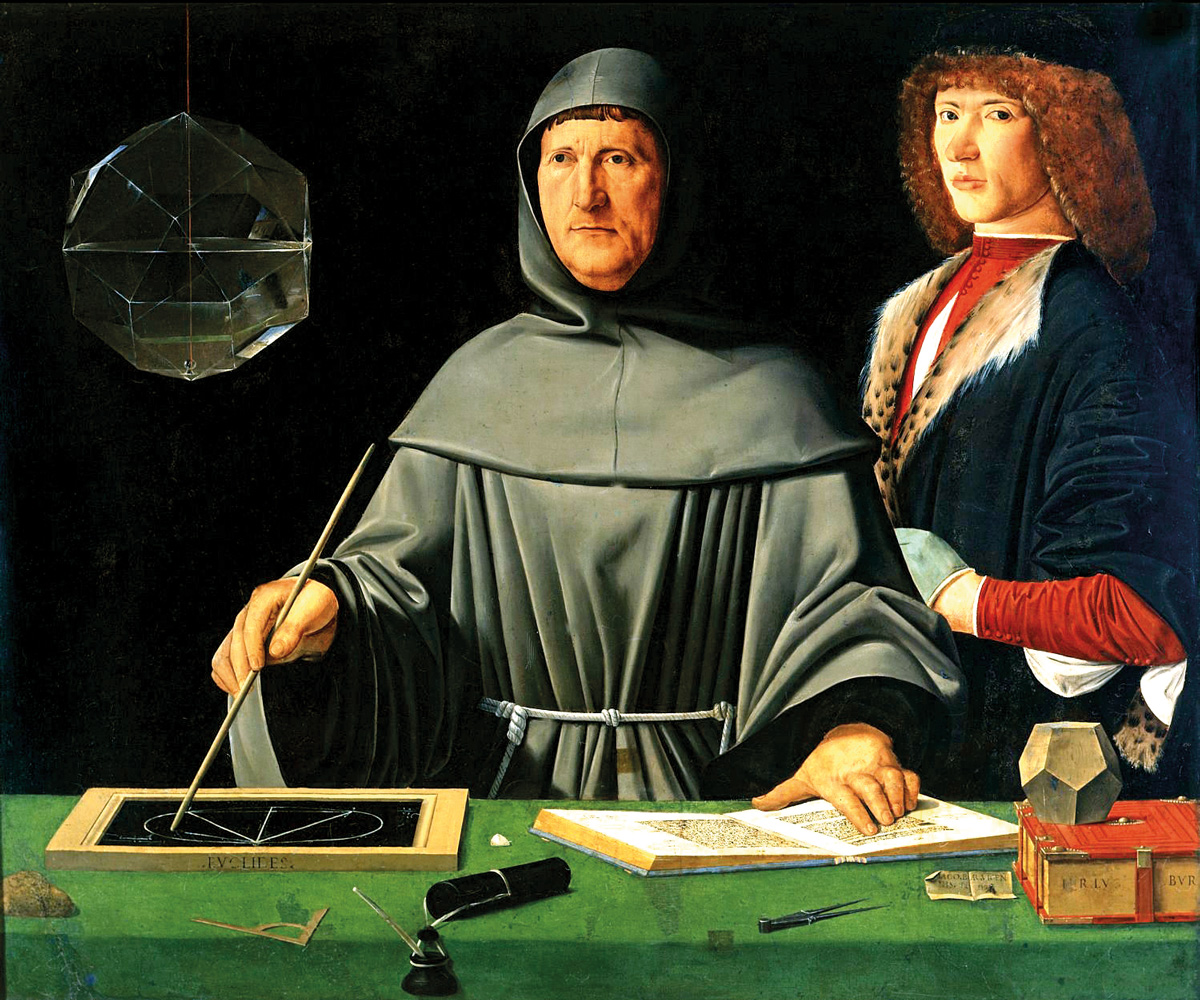 Translated into all the languages ​​of the world, studied and considered one of the fathers of the modern economy, Pacioli would have liked to remember himself as a diligent master who offered his book to all those who wanted to learn and who came to listen to his lessons. This is the portrait that he leaves us, the iconography of the monk with the open book before him in the act of explaining and unfolding his thought.

His voice still lives the university lecture halls, in the courts of Italy as well as among Venetian merchants, to lecture us every day.

The lot will be offered in the Books, Autographs and Prints sale on 20 June at Finarte in Rome 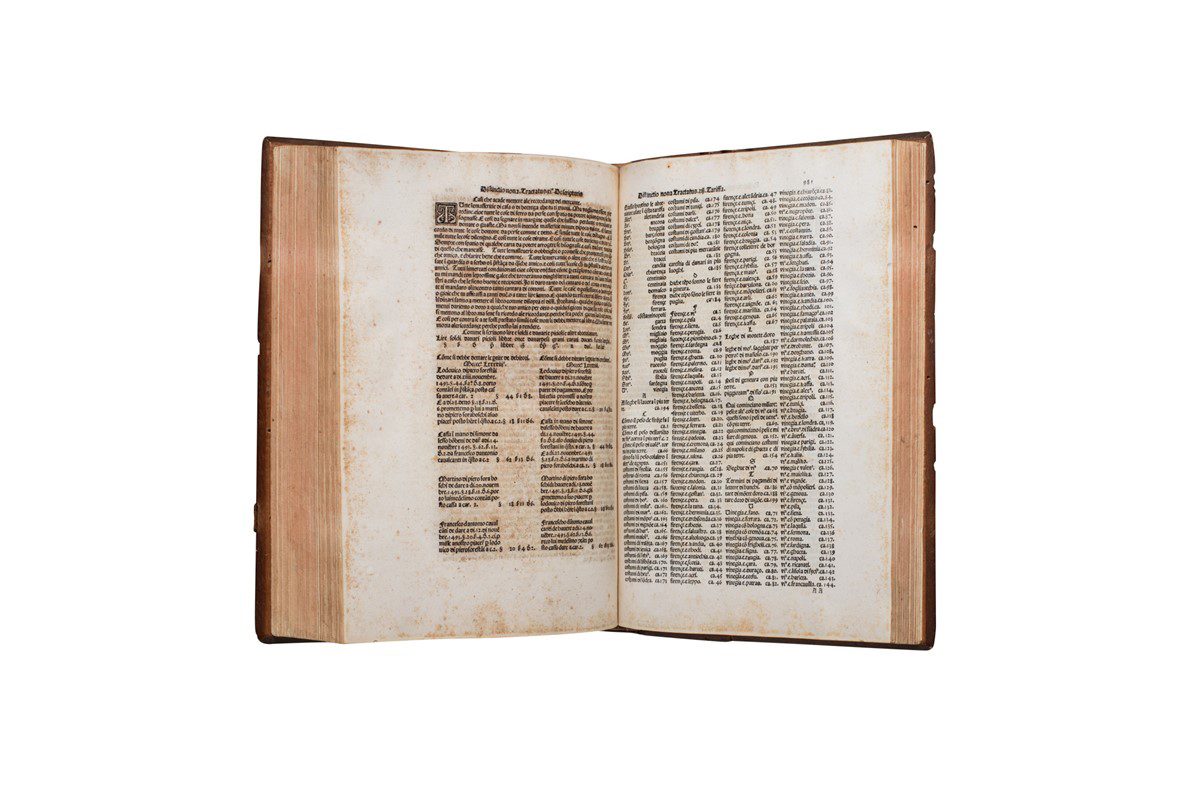 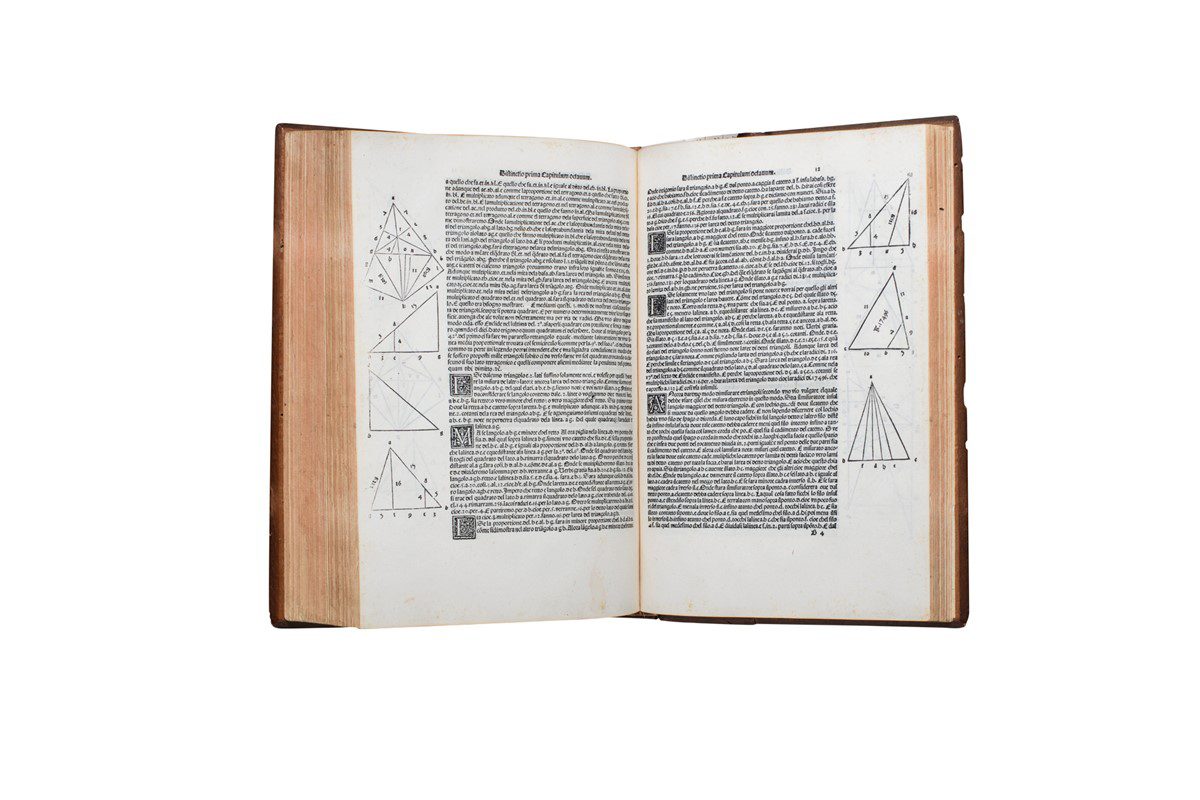 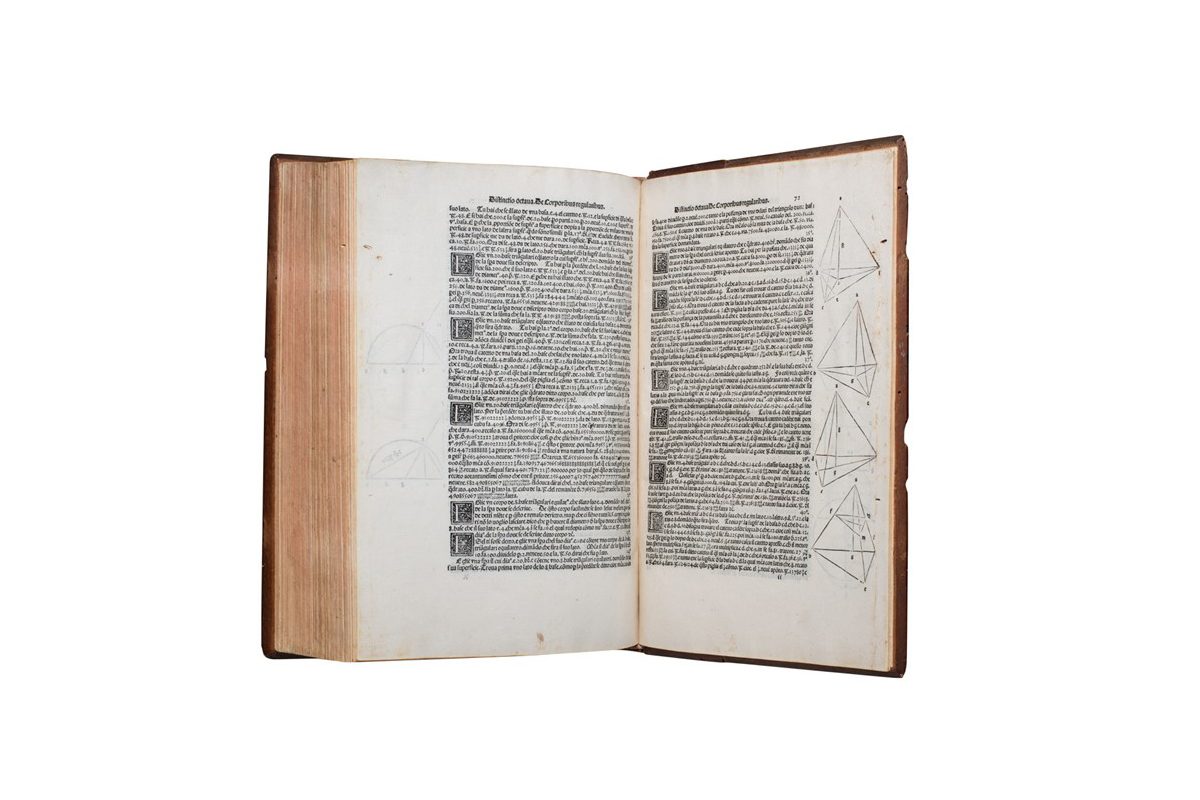 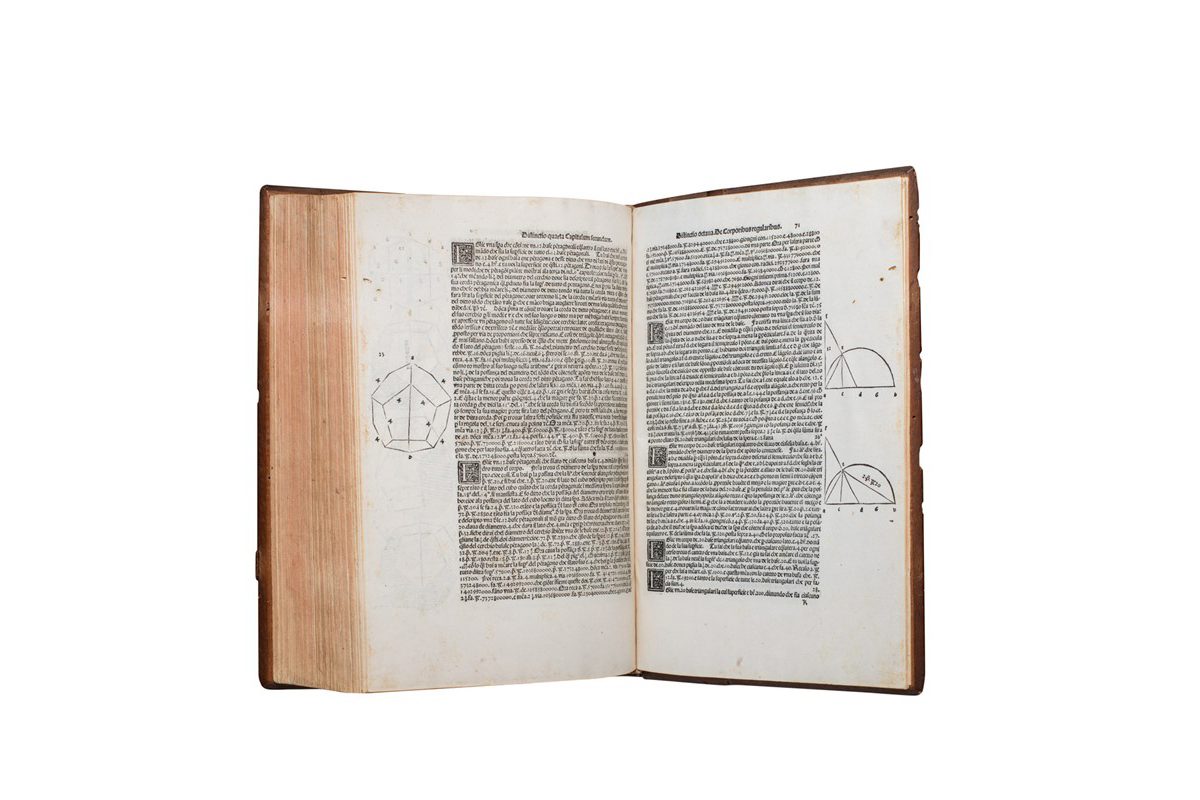 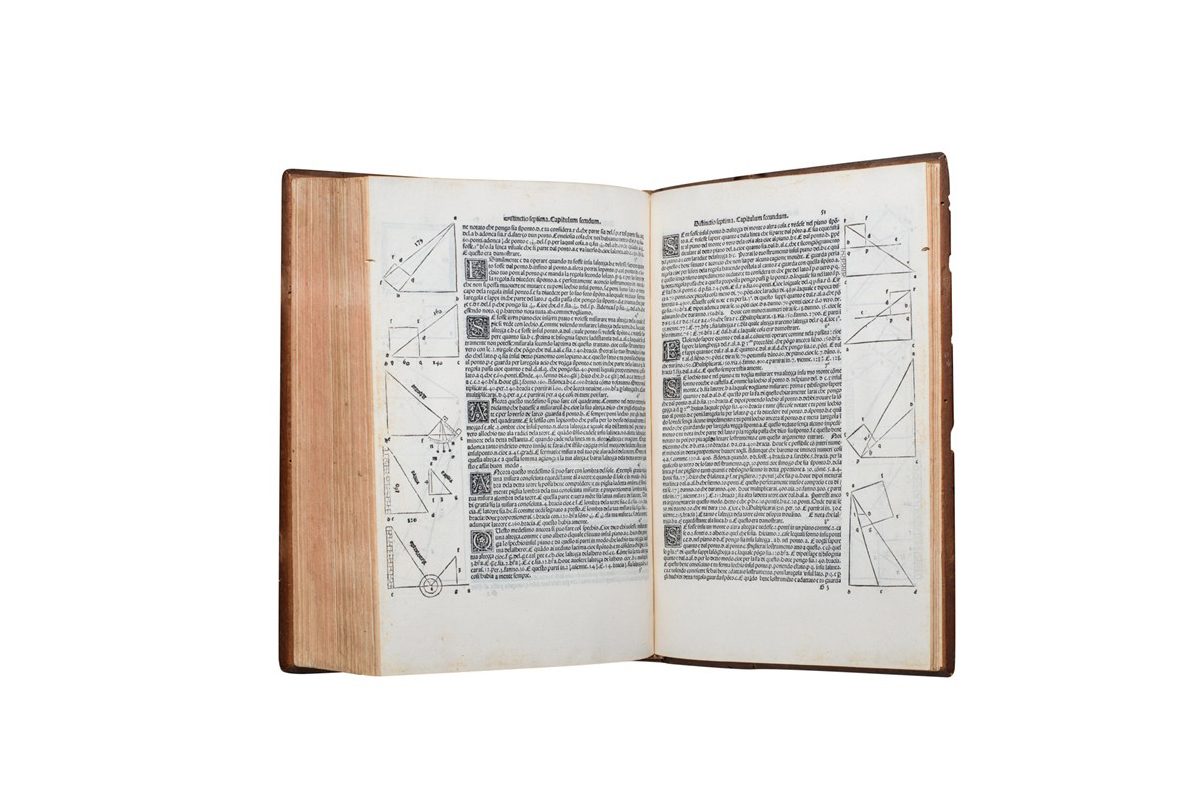 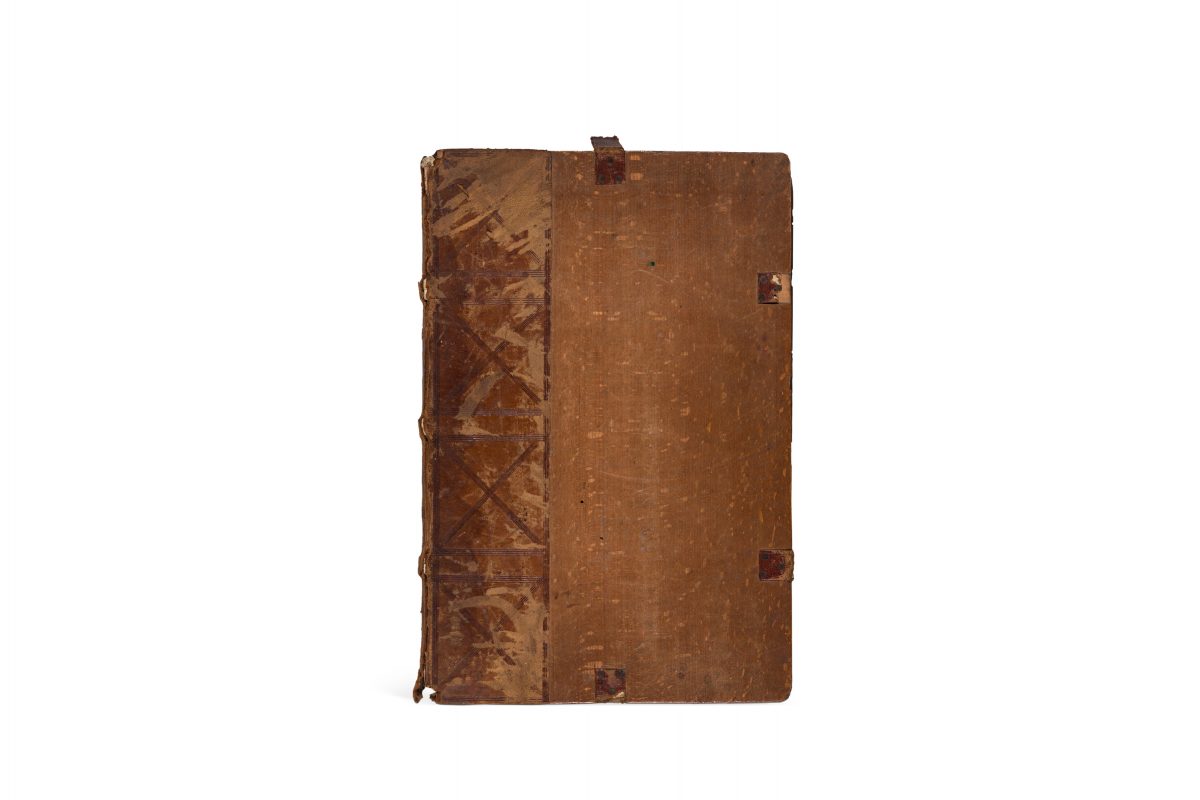 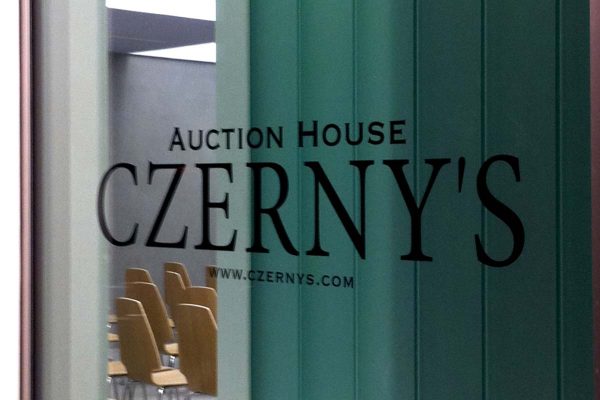 A merge aiming to expand the auction house’s offer on the international market through the acquisition of one of the most important realities in Europe in the Antique Arms and Militaria field. 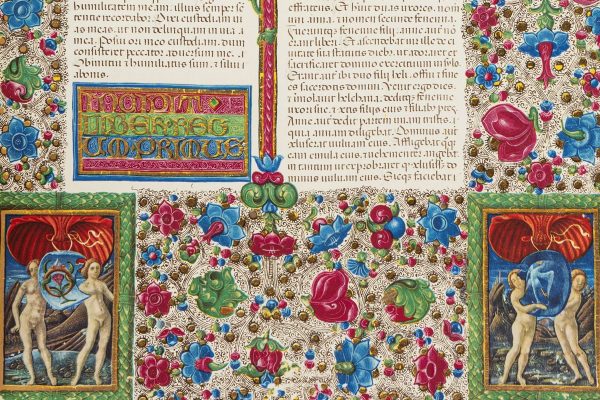 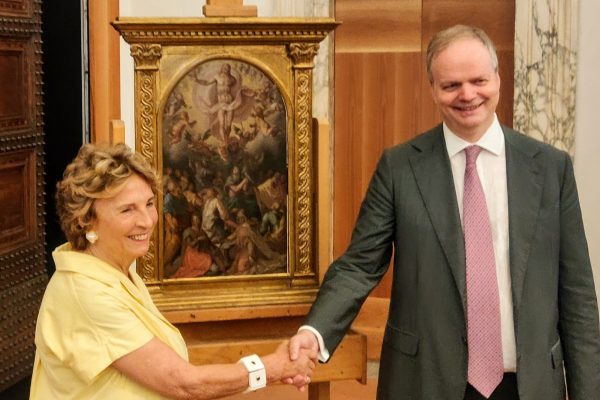