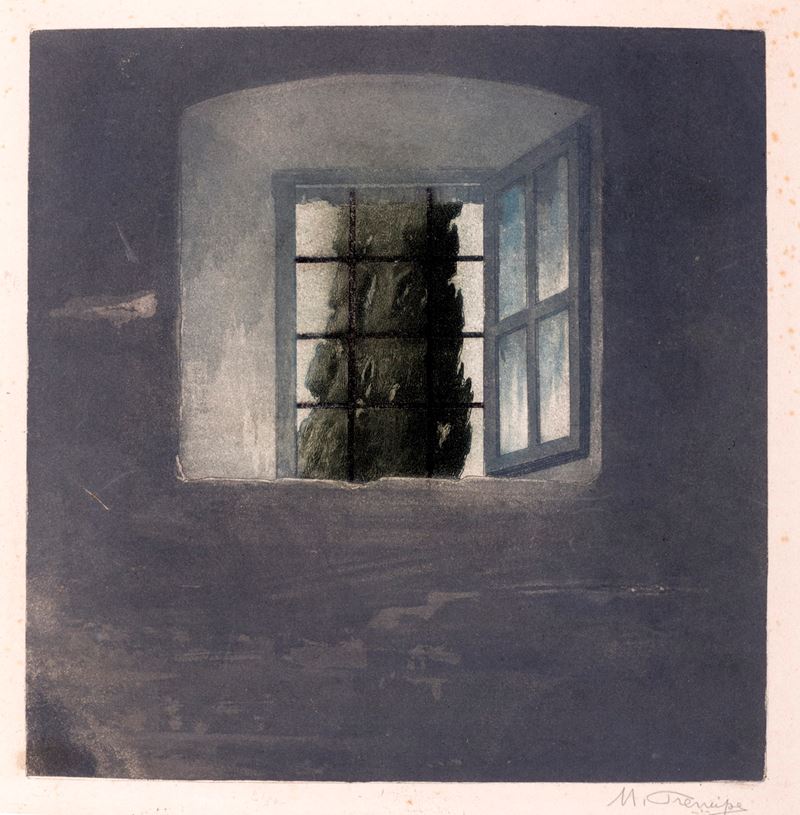 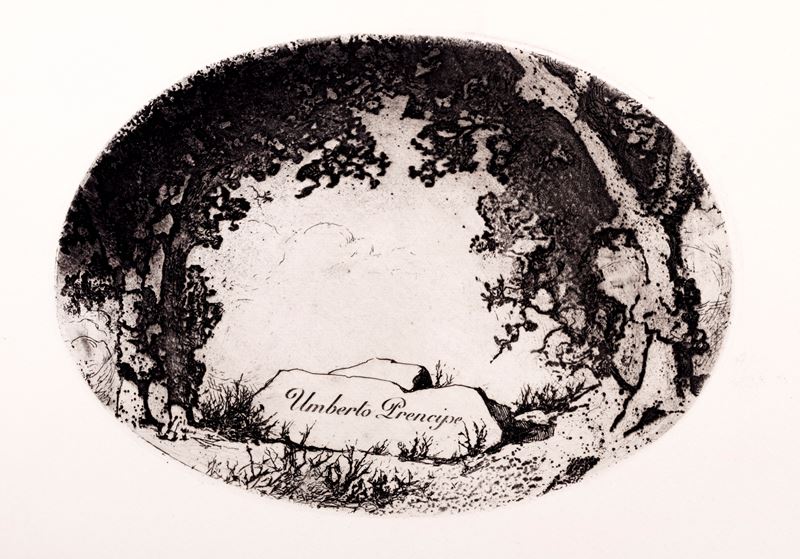 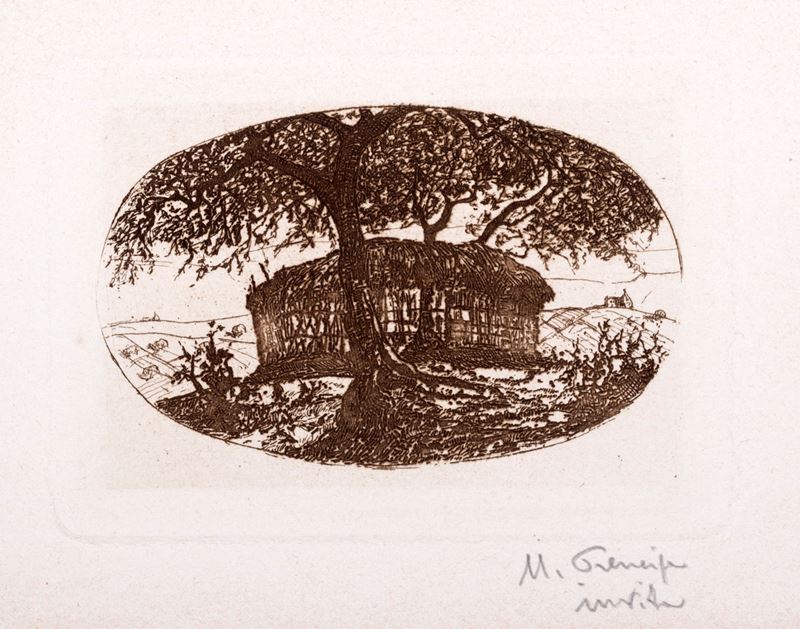 Trained at the Academy of Fine Arts in Rome, Umberto Prencipe became one of the main exponents of the Roman symbolist season at the 1905 exhibition of the Società degli Amatori e Cultori with the painting Clausura, purchased by the National Gallery of Modern Art. Linked to the circle headed by Giacomo Balla and Giovanni Prini, the artist later stayed in Orvieto, developing a personal poetics based on the theories of the "landscape state of mind" and on the stimuli of symbolist and crepuscular literature. The engraving, to which he began to devote himself as a self-taught starting from 1905, immediately qualified as a privileged medium to translate his shadowy inner world tending to melancholy and isolation. In fact, rare dry-point and visionary etchings and aquatints date back to the fruitful period of Orvieto, which subsequently earned him the appointment as professor of engraving at the Institute of Fine Arts in Lucca and at the Academies of Naples and Rome. In these works, the Umbrian city with its impervious cliff, its towers, its ancient walls, the looming presence of the cathedral, the enclosed and collected spaces qualify as a privileged inspiring motif, an ideal place to mirror its psychic states. Identified with the Bruges described by Georges Rodenbach in the novel Bruges-la-Morte and lived through the literary descriptions of Gabriele d'Annunzio in The triumph of death and in the collection of lyrics The cities of silence, Orvieto is often portrayed in views from below that amplify its isolated character thus becoming an emblem of the solitary condition of the artist, or it is captured in its empty and deserted spaces, immersed in the fog, in the night or in the twilight, where the towers and the profile of the cathedral acquire unreal accents and become disturbing apparitions. The symbolic assumption of the real datum is favored by the synthesis of language in juxtapositions of synthetic masses of light and dark, and by the narrowing of the visual field in a tendency to fragment, to the photographic focus common also to the Roman environment (Balla, Cambellotti, Grassi, artists with whom he was in contact in those years), as is evident in Il duomo or in Il convegno. The latter, performed in Rome and depicting the arch of the bells in St. Peter's Square, in the mysterious shadow cast by the statues that appear to be ghostly presences, exemplifies Prencipe's ability to invest the architectural detail with mysterious tensions. A close-up, concentrated vision, capable of making a detail speak, is also in Il capanno, an image of a solitary shed in the Orvieto countryside, and in Country Cemetery, where the motif of the window, a very recurring element in Prencipe's existential symbolism as an image of isolation, is in this case made more dramatic by the presence of the grate that imprisons the artist on this side of life. 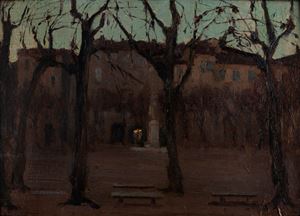 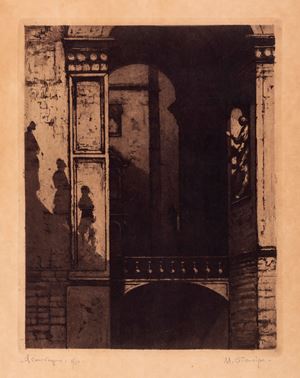 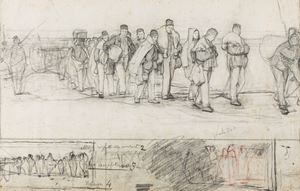 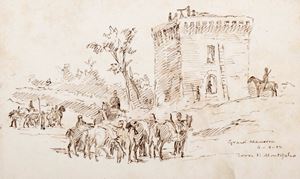 Lot of two drawings with soldiers 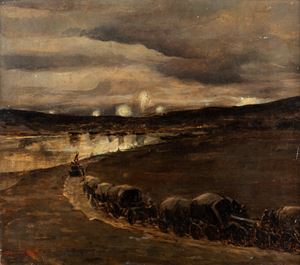 Episode of the First World War 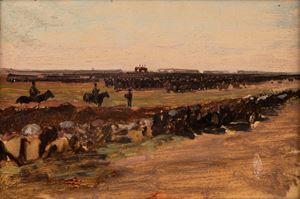 "Rome, The review of the troops of the German Emperor Frederick II, Centocelle campaign", 1888 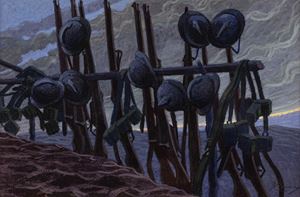 Souvenir of the First World War 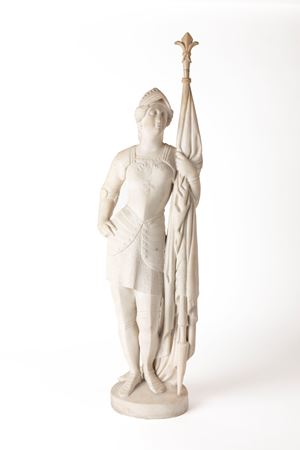 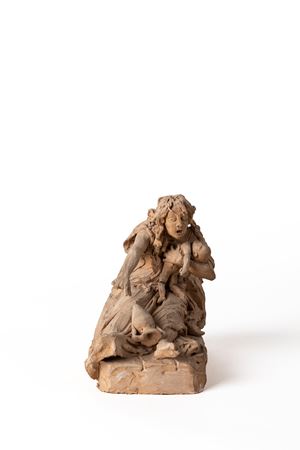 Hagar and Ishmael in the desert 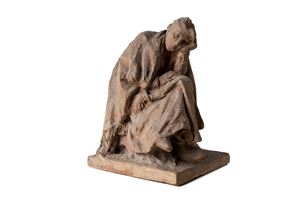 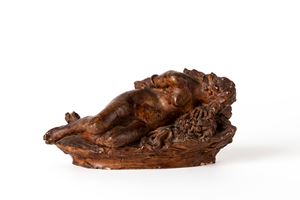