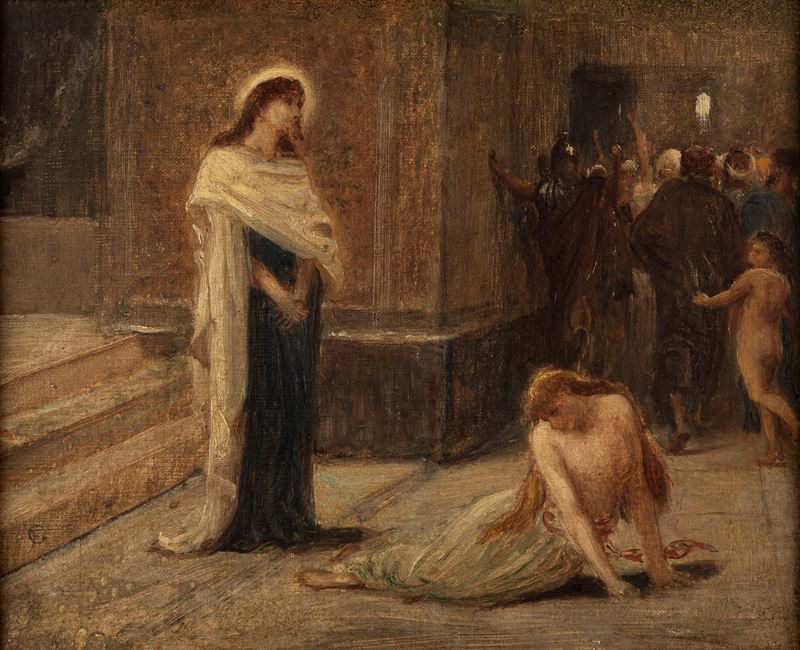 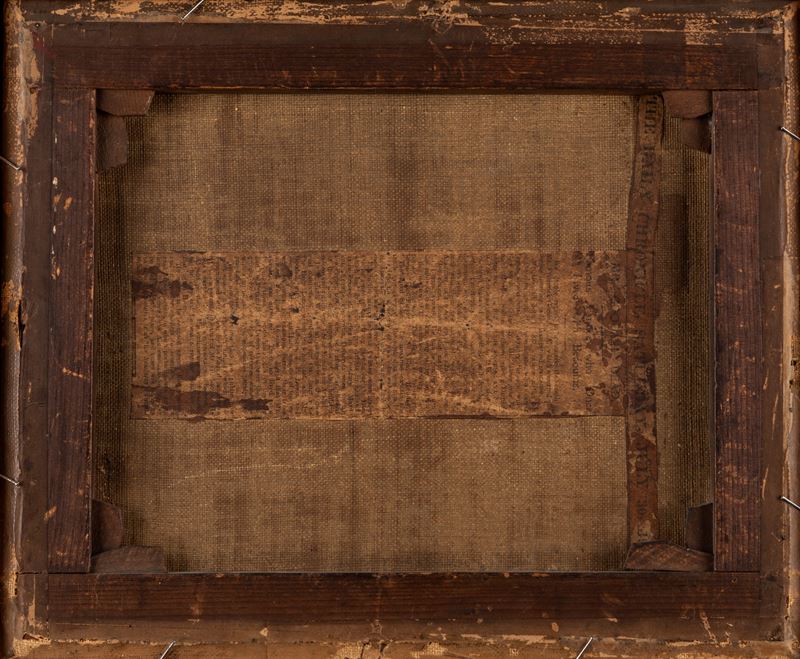 initialed on the left downwards: FG

On the back, on the canvas, old newspaper clipping The Daily Chronicle on the occasion of the death of the artist.

Son of the engraver and decorator Edward Goodall, Frederick Goodall made a name for himself with landscape paintings and rural life scenes in the wake of Scotsman David Wilkie, exhibited with successful starting from 1838 in the exhibitions of the Royal Academy, of which he became a member in 1852. A trip to Egypt, conducted in 1858 and repeated in 1870, during which he lived in contact with Bedouin tribes performing numerous landscape and figure studies. Goodall thus became one of the main English orientalist painters, highly appreciated by the British aristocracy and the international market, in which he imposed himself through the merchant Ernst Gambart. Among his subjects, for which the artist drew not only from his notes but also from the vast repertoire of clothes and furnishings brought back to his homeland, as well as Nilotic landscapes, portraits and scenes of market and life in the desert, there are numerous biblical motifs , taken from both the Old Testament and the Gospel. Among these is this small table depicting the episode of Christ and the adulteress, clearly a study for the work Misery and Mercy exhibited in 1887 at the Royal Academy and described in the catalog as follows: 'When Jesus has lifted up himself, and saw none but the woman, He said unto her, Woman where are those thine accusers? Hath no man condemned thee? ' She said, 'No man, Lord'; and Jesus said unto her 'Neither do I condemn thee; go, and sin no more ' [1]. Compared to traditional iconography, which saw the two figures of Christ and the woman surrounded by scribes and Pharisees, Goodall chooses to represent in the work the moment of forgiveness, the one in which, after asking the accusers which of them was without sin to throw the first stone, they move away towards the exit of the temple, leaving him and the woman alone. The choice to focus attention on the mystical encounter between the teacher and the penitent, pruning the scene from some canonical iconographic elements, such as the writing on the sand or the hints to stoning, perhaps made on the echo of some nineteenth-century examples such as that of Émile Signol (Le Christ et la femme adultère, 1840, Paris, Musée du Louvre), responded well to the typical modalities of Goodall's painting, more allusive than didactic. To amplify the sense of exotic mystery was the nocturnal setting, illuminated by the torch in the background and by the saving aura of Christ, according to that seductive and suggestive idea of biblical history that so pleased the  tastes of the bourgeoisie of the time and which was very successful in Victorian England.

To request a Condition Report, please contact ottocento@finarte.it The department will provide you with a general report of the condition of the property described above. Please note that what Finarte declares with respect to the state of conservation of the assets corresponds only to a qualified opinion and that we are not professional conservators or restorers. We urge you to consult with a restorer or conservator of your choice who will be better able to provide a detailed, professional report. We always suggest prospective buyers to inspect each lot to satisfy themselves as to condition during the exhibition days as indicated in the catalog. 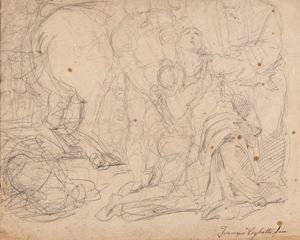 Study for the "Martyrdom of Santa Felicita and her seven children", About 1850 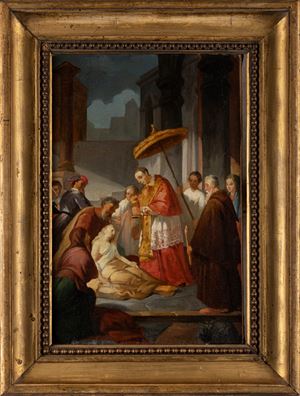 San Carlo gives the Eucharist to the plague victims (sketch for the altarpiece in the parish church..., About 1846 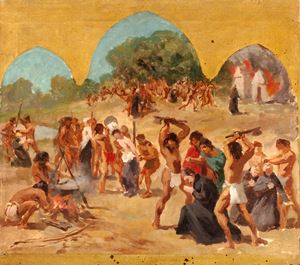 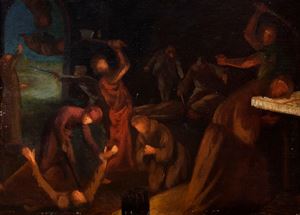 First idea for the painting "The martyrs of Gorcum" 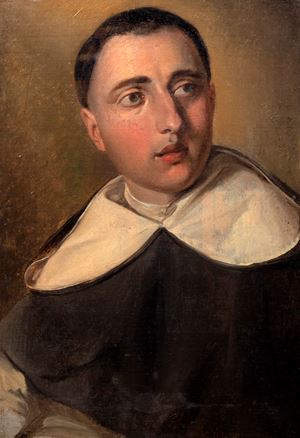 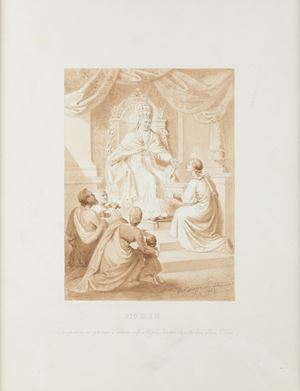 Pius IX dispenses to the poor the offering offered to him by the Charity of the faithful, 1862 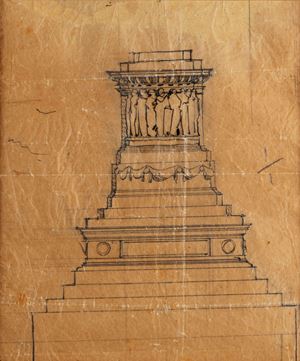 Three architectural sketches for the Monument to Vittorio Emanuele II in Rome, mounted in a single...

The Universal Suffrage, sketch for a fresco in the town hall of Cannes 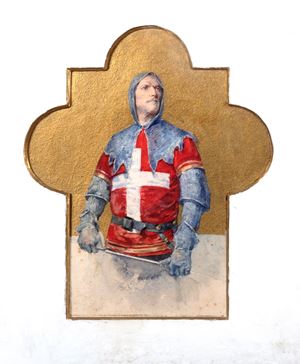 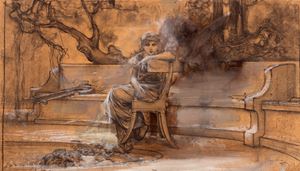 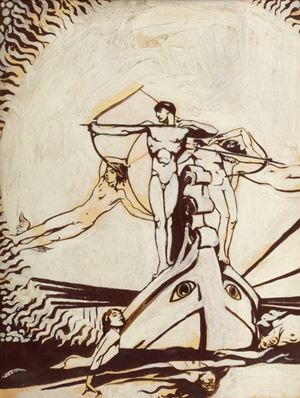 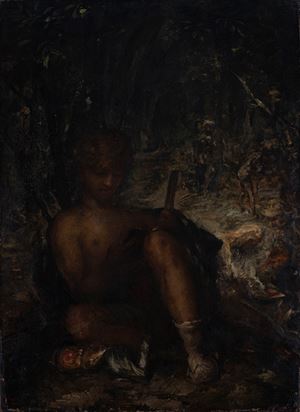