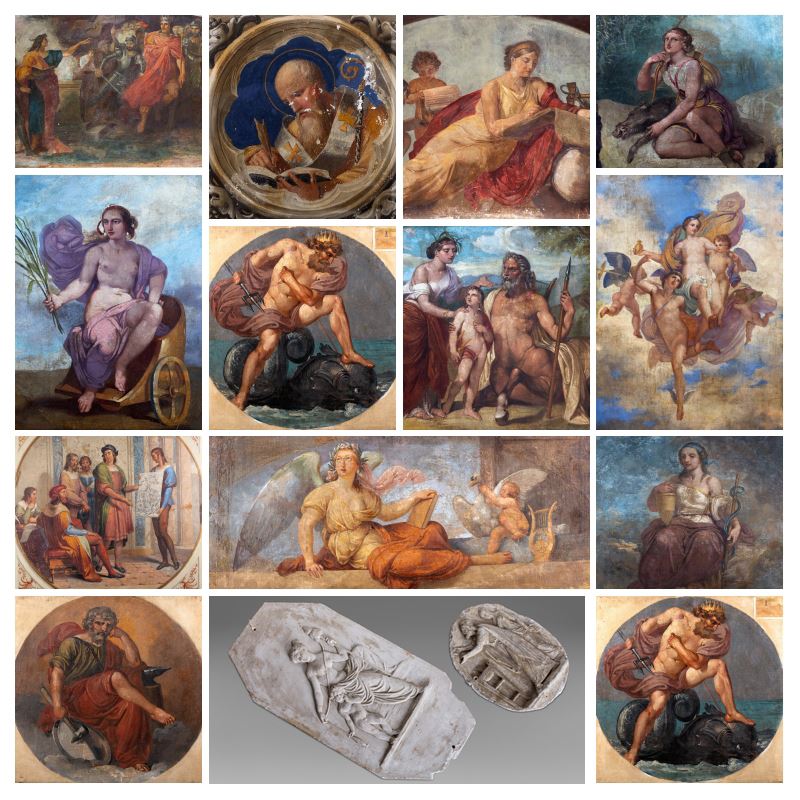 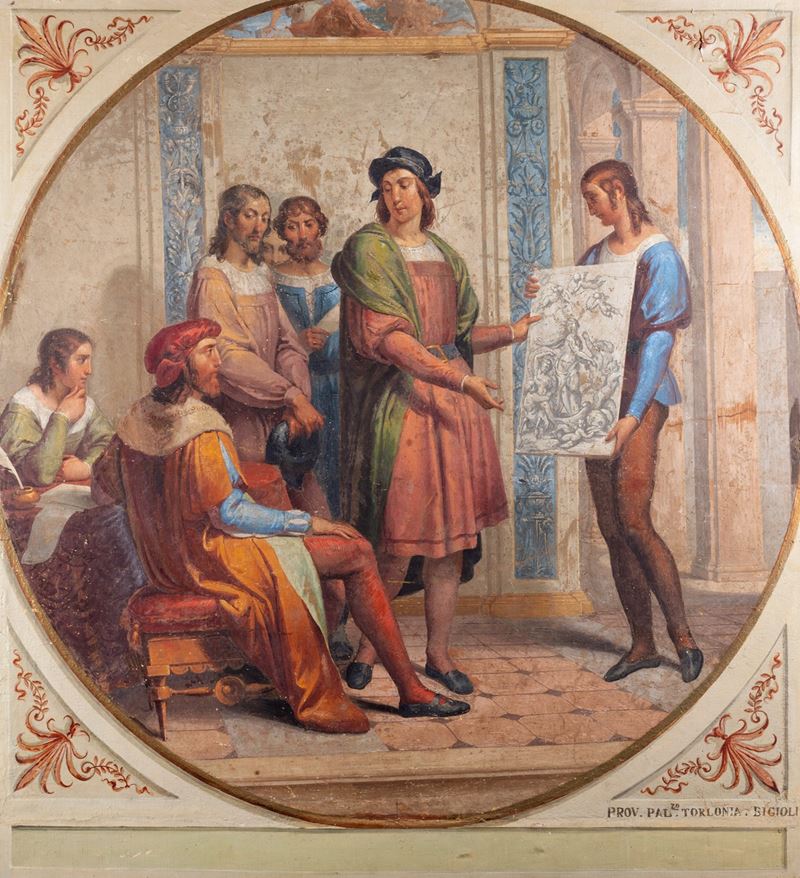 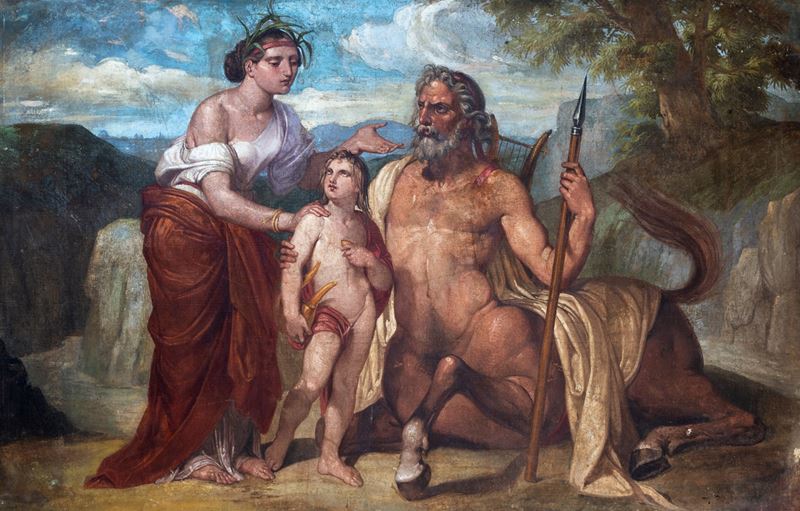 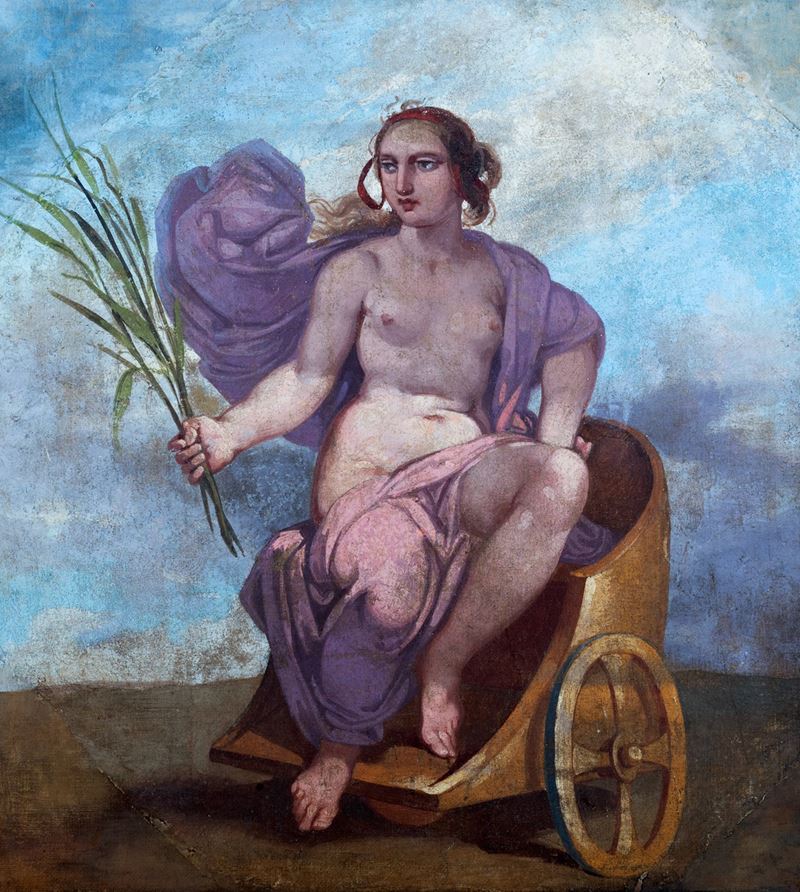 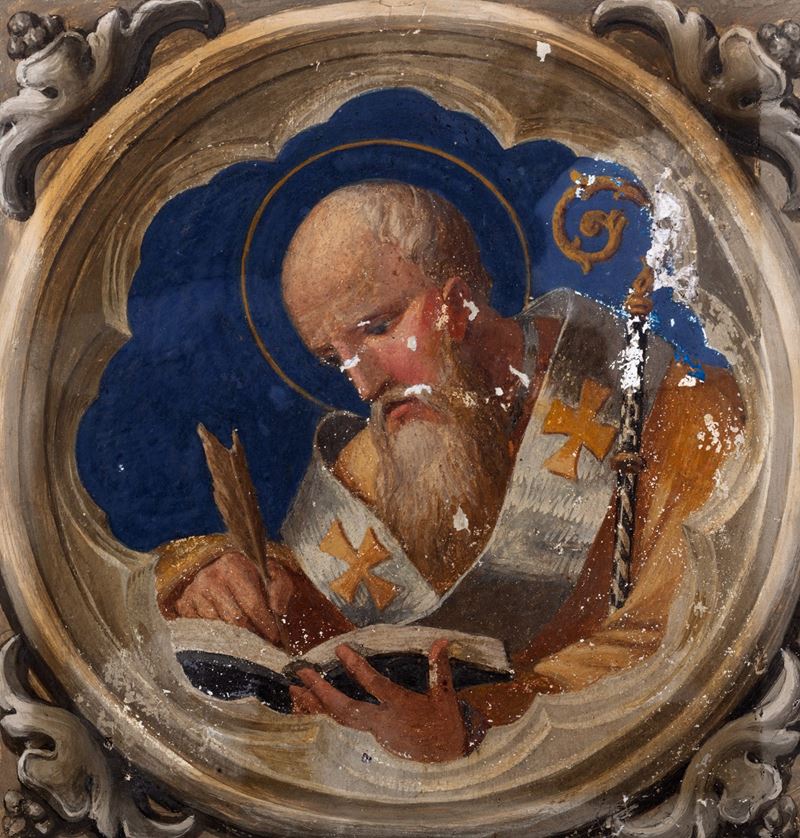 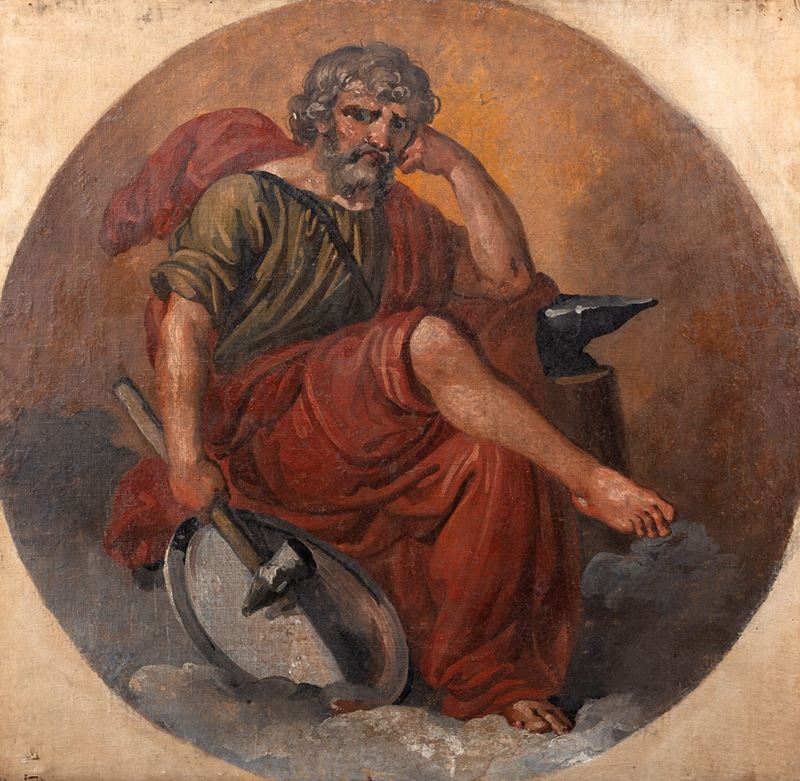 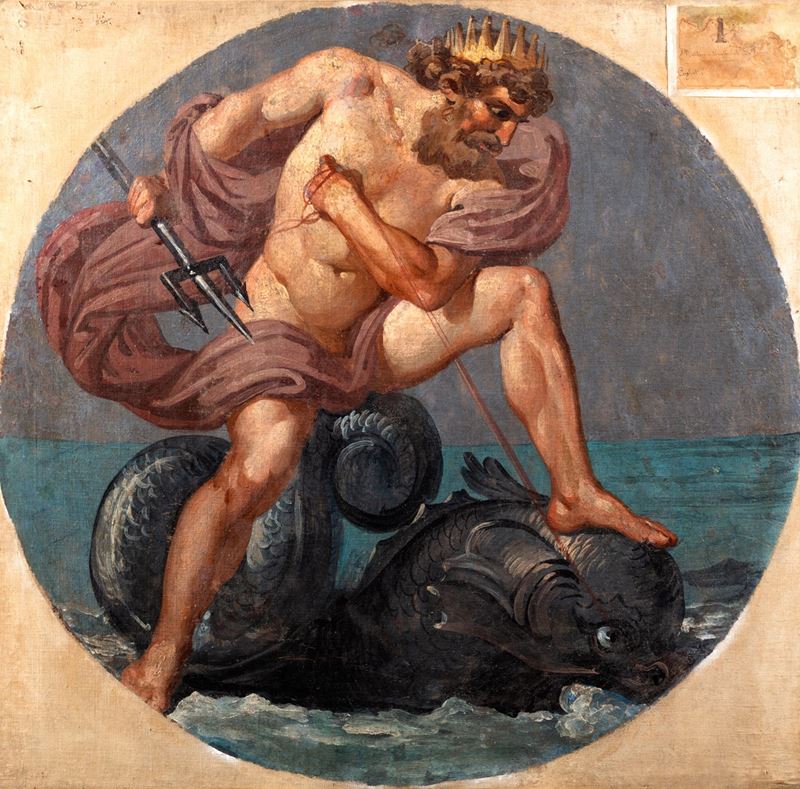 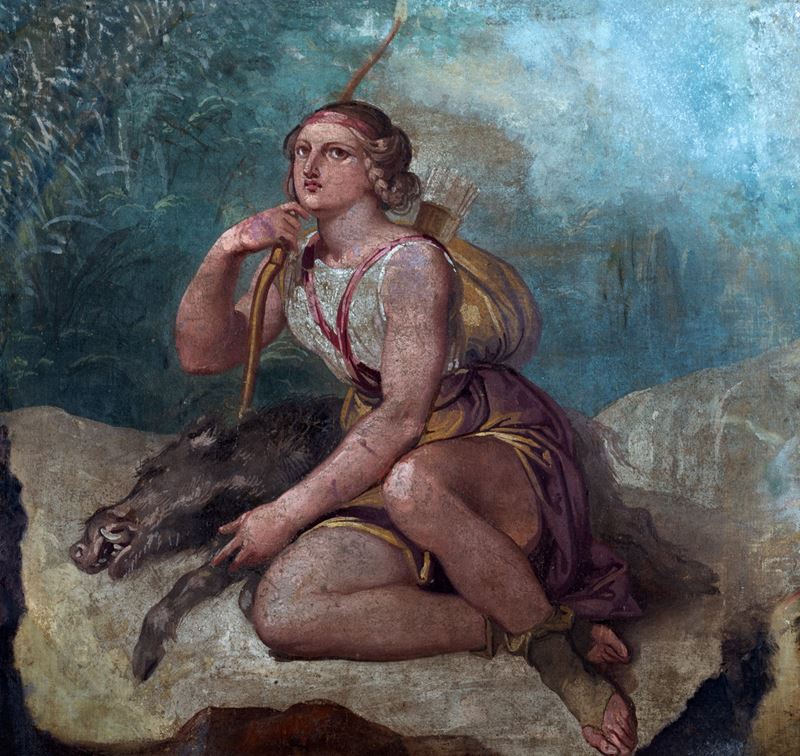 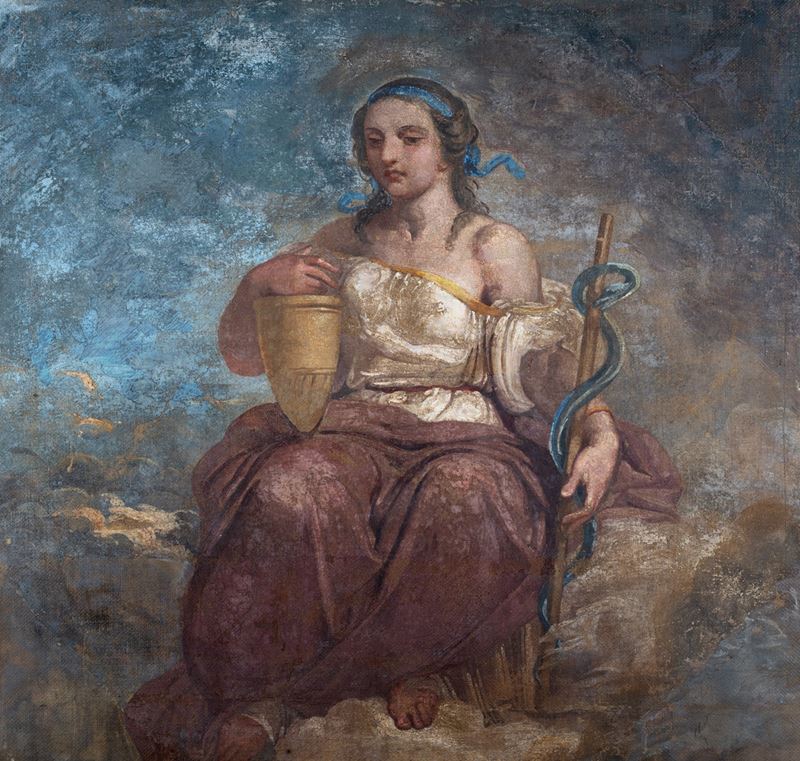 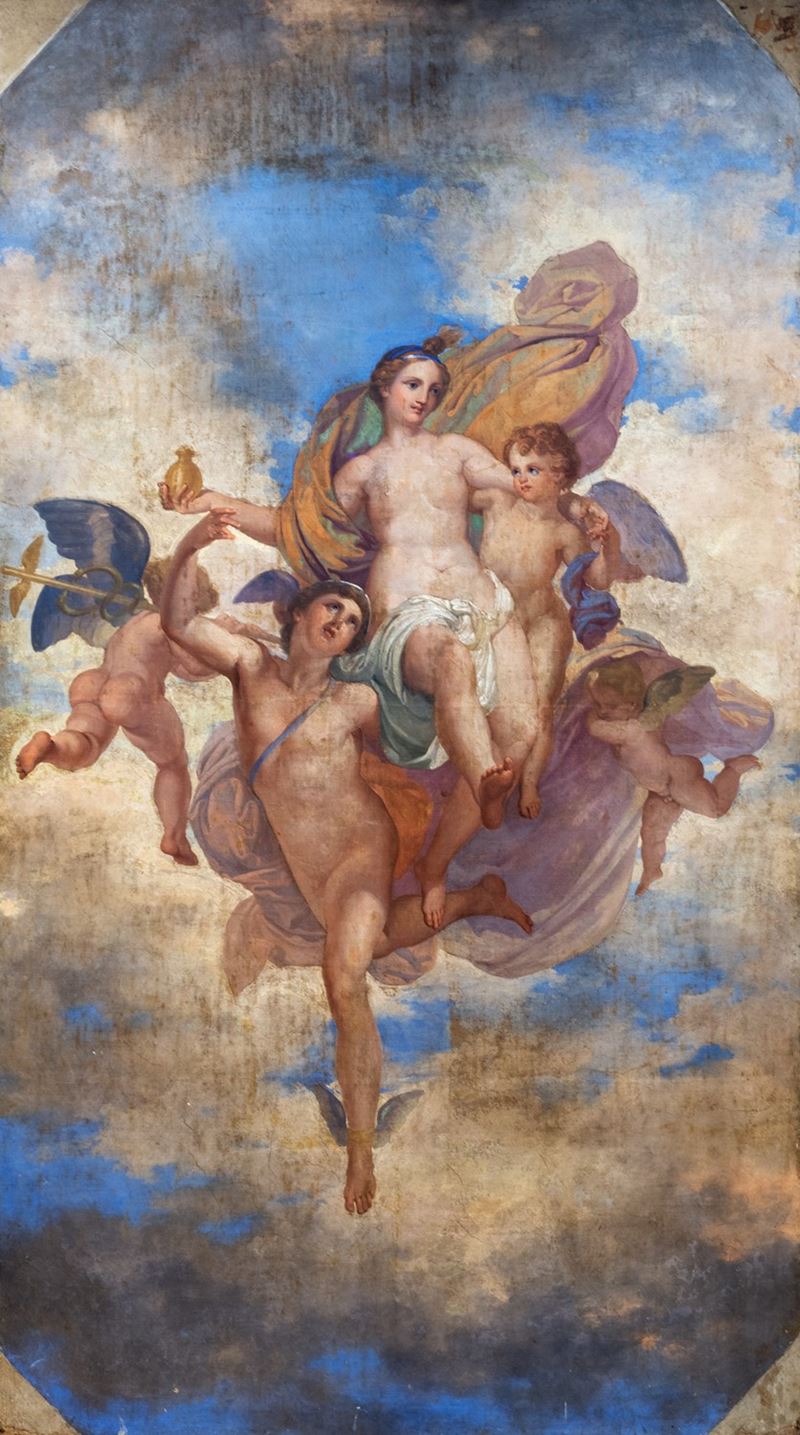 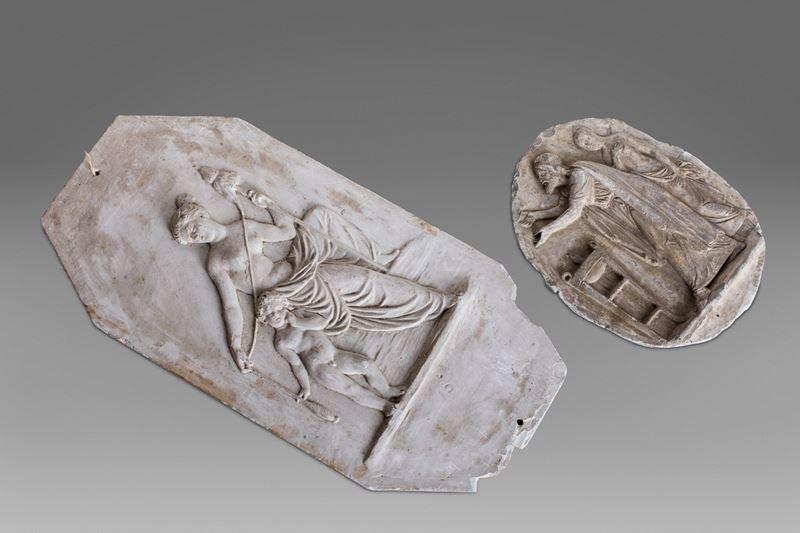 Exceptional group of works from Palazzo Torlonia in Rome

The twelve frescoes and two plaster tiles, coming from the demolished Torlonia palace in Piazza Venezia in Rome, have been recognized as being of exceptional interest pursuant to art. 10, paragraph 3, letters d) and e) of Legislative Decree no. 42/2004 and therefore subject to the start of a block notification procedure by the Special Superintendence of Archeology, Fine Arts and Landscape of Rome in a communication to the auction house, dated 22 February 2021.
, offered in the Incanti d'Arte auction of 23 February last, were withdrawn from the sale following the ministerial notification and are now re-offered in a single lot in a timed auction.
Given the extraordinary historical-artistic importance of the series of goods, no auction commission will be applied to the buyer.

More than one hundred and twenty years after the demolition of the Torlonia palace in Rome, 14 works from the princely residence, furnished and decorated with great pomp by the Torlonia family, are offered for auction in a single lot.

The Bolognetti family building in piazza Venezia was purchased in 1807 by Giovanni Torlonia and immediately destined by the prince to become the representative residence of the powerful banker family.

First, the exceptional jewel of the collection was Hercules and Lichas by Antonio Canova. The sculptor's masterpiece, now kept at the National Gallery of Modern Art in Rome, was exhibited in the gallery on the noble floor of the building, designed by Canova himself, who also prepared the most suitable lighting to make the most of his colossal statue. < br>
In 1829 Alessandro Torlonia, Giovanni's third son, inherited the palace and ordered the most renowned artists of the time to try their hand at a technique that had long been disused, the good fresco, for the decoration of all the rooms and rooms of the building, under the guidance of the architect Giovanni Battista Caretti.

The results of the undertaking were widely described by the scholar Giuseppe Checchetelli in A day of observation in the palace and villa of SE Mr. Principe D. Alessandro Torlonia , published in Rome at the Crispino Piccinelli printing house in 1842, and by illustrious guests such as Stendhal who, on a visit to Rome, celebrated the masterpieces and festivals of the Torlonia family in his Promenades dans Rome of 1829. “The dances of Prince Torlonia in Rome are superior to those given by Napoleon I. [...] The four sides of the courtyard of his palace are occupied by magnificent galleries that communicate with several vast halls in which we dance. The best living painters, such as Palagi, Camuccini, Landi, have painted them. [...] The festivals of the Torlonia are more beautiful than all those of the sovereigns of Europe. " Many others must be added to the artists mentioned by the French writer, including Francesco Coghetti and Filippo Bigioli, whose pictorial proofs in good fresco are offered for auction.

Following the urban overhaul in front of the Vittorio Emanuele monument II, many ancient buildings were demolished to make room for the Vittoriano and the Bolognetti-Torlonia palace was perhaps the most sensational "victim" of the transformation of Rome into the capital of the Kingdom of Italy.

The wall decorations created for the unfortunately part of the prestigious Torlonia commission was destroyed together with the palace at the beginning of the twentieth century and, if saved from demolition, dispersed.

The furnishings were sold in a first auction of the Roman Sangiorgi Gallery in 1901 (cf. . Catalog of the vente au palais du prince Torlonia in Rome: vente pour cause de demolition , Rome, at the printing works of the Unione cooperativa editrice 1901). A second important sale, held in 1902 in via Margutta 55, and then a third one, which took place the following year, were organized by the Neapolitan antiquarian Francesco Tancredi who first saved the works of art of Palazzo Torlonia and then offered them up for auction. (see Large sale of all the friezes, stucco candlesticks and various marbles of the now demolished princely Torlonia palace, in Piazza Venezia , Rome at the printing press of Corriere della Provincia 1902; Precious collection of all the frescoes and decorative stuccos of the demolished Torlonia palace in Piazza Venezia in Rome , [edited by] Francesco Tancredi, Rome 1903, and & nbsp; R. Artioli, The wonders of Palazzo Torlonia , in “Industrial artistic Italy”, year IV, issue II, February - March 1906, p. 1-9). These include the frescoes of the so-called Alcova Torlonia (now preserved in the Rome Museum of Palazzo Braschi) and other paintings and furnishings. For the occasion Tancredi made use of the intervention of the restorer Pietro Cecconi-Principi who transported the frescoes on a thin gauze and on a flap canvas (in some cases it is still visible on the pictorial surface a trace of the velatino that was glued on the surface during the tear operation). Where necessary, canvases and frames were added to the original works, thus transforming them from wall paintings of articulated shapes, into paintings made all rectangular, more appropriate and practical to furnish the homes of the wealthy and numerous customers looking for Torlonia lots. Without many pleasantries, then, auction tags were applied on the canvases, such as the one on the upper right corner of Neptune.

In the capital, meanwhile, the Roman aristocracy, closely linked to the papacy, was replaced by the 'beginning of the twentieth century that linked to the Savoy, as evidenced by the collecting events of Countess Amalia Canonica, friend and trusted collaborator of Laetitia di Savoia Bonaparte, Duchess of Aosta, who a few years after the auctions of Tancredi, in 1920, managed to acquire the substantial nucleus of frescoes from the demolished palazzo in piazza Venezia for the furnishing of his Roman residence in piazza Galeno.

The rarity of all Torlonia works and its value as a testimony of an era have contributed to animate public opinion and arouse much interest in the sale of Finarte.

The Ministry for Cultural Heritage and Activities and Tourism has judged the group to be of exceptional interest, as reported in the mo activation of the constraint provision of 22 February 2021. "The auction in question [...] brings to light some significant examples [of the Torlonia frescoes and reliefs] which, despite their fragmentation, document a particularly important phase in the history of the figurative arts Romanes of the nineteenth century. "

In compliance with the choices of the Special Superintendence of Archeology, Fine Arts and Landscape of Rome, the current owners, who have inherited the works of the Countess Canonica, have decided, in agreement with the auction house, to offer the single lot to the public auction.

Palazzo Torlonia, Rome, until about 1900; purchased by the Neapolitan antique dealer Francesco Tancredi and with him until 1902-1903; received in the collection of Countess Amalia Canonica (Turin 1864 - Rome 1943) in the 1920s and by inheritance to the current owners. & nbsp;


Traditionally this work is referred to to Alessandro Bombelli who for Prince Torlonia created large lunettes with allegories of the arts, however those illustrated by Iozzi in his volume dedicated to the Palazzo di Piazza Venezia are larger than that offered in the lot (see Iozzi, & nbsp; Il palazzo Torlonia & nbsp; cit., Rome 1902, p. 60s.).


The work was probably in the Achille Gallery, on the first floor of Palazzo Bolognetti-Torlonia.

The painting for the religious theme it was probably inserted in the neo-Gothic chapel of the Palazzo di Don Alessandro Torlonia, whose Patron Saints were frescoed by Costantino Brumidi (see Checchetelli, & nbsp; A day of observation & nbsp; in the palace & nbsp; cit., Rome 1842, p. 56 ff.).


The muse represented here is Erato , protector of love poetry, as can also be seen from her iconographic attributes: the lyre, the book, the laurel wreath; the swan, strangled by the putto, refers to Venus, as well as being a quote from a famous Hellenistic sculpture.


The work was in origin in the Room known as the Consoni or the four Poets, on the second floor of Palazzo Bolognetti-Torlonia. The episode is taken from canto III of Orlando Furioso: the sorceress Melissa prophesies her future and her descendants to the warrior Bradamante; the characters on the right are the spirits of the Estense family who will descend from Bradamante and Ruggero. In the room the four great poets are represented on the walls with as many episodes inspired by their work: Dante shown by Virgil to Homer, Bradamante offered in the lot, Laura appearing in a dream to Petrarch, Erminia del Tasso.
BIBLIOGRAPHY Checchetelli, A day of observation & nbsp; in the palace cit., Rome 1842, & nbsp; p. 49. & nbsp; Iozzi, & nbsp; The Torlonia palace cit., Rome 1902, p. 82.

In the Inventory of all the tempera and stucco frescoes detached, in 1900 (?), from the sumptuous Palazzo dei Principi Torlonia in Rome (Piazza Venezia ) , and kept in a typewritten copy by the heirs of Countess Amalia Canonica, are listed at number 12: “four mythological subjects, circular shape diam. m. 0.72 by the painter Coghetti ".

The work was originally located in the Octagonal Room known as del Coghetti or Psyche, of the representative apartments of the Torlonia spouses, on the second floor of the Palazzo, overlooking Piazza Venezia. Among the episodes of the fable of Cupid and Psyche painted by Coghetti, Mercury carrying Psyche to heaven is judged by Oliviero Iozzi to be "one of the best conducted" and for this reason illustrated in his volume on Palazzo Torlonia (cf. Iozzi, & nbsp; The Torlonia palace & nbsp; cit., P. 81). The episode is the last in history and follows: & nbsp; Love that tears the veil from purity; Ignorance makes Love jump, a child fed by Hope; the Marriage of Psyche and the people who honor it . The Raphaelesque quotations, which Don Alessandro Torlonia appreciated so much, are interpreted here by the painter with a neoclassical sensibility of singular visual impact, thanks also to the large dimensions of the work. & Nbsp; A preparatory cartoon by Francesco Coghetti, commissioned by Prince Alexander and depicting & nbsp; Mercure qui porte Hèbé [sic!] dans l'air , was exhibited at the Exposition Coghetti in Via Condotti 21 in Rome and published in a small catalog, with no indication of the year, at number 23, together with other works commissioned by Torlonia dei Coghetti father and son.
BIGLIOGRAPHY Checchetelli, A day of observation in the palace cit., Rome 1842, p. 41. & nbsp;
Iozzi, & nbsp; Palazzo Torlonia & nbsp; cit., Rome 1902, p. 81 (ill.). Vente des Peintures qui décoraient le Palais Torlonia / Place Venise récemment démoli , Rome sa, Maison de Ventes S. Innocenti, [...] Via del Babuino, illustrated on the cover.

JULIUS TROSCHEL (Berlin 1806-Rome 1863) Two plaster plaques, one octagonal with a mythological subject and an oval with a sacrificial scene


Plaster decorations of different shapes they adorned the rooms of the sumptuous Palazzo Torlonia alternating with frescoes. Most of the Torlonia stuccos are the work of the Prussian sculptor Julius Troschel based on inventions by Bertel Thorwaldsen (see Iozzi, & nbsp; Il palazzo Torlonia cit., Rome 1902, p. 60s.). The sketch with a scene of sacrifice, modeled on examples taken from Roman statuary, most likely came from the Chamber of Trajan on the second floor of the building in Piazza Venezia, with episodes from the life of the emperor by Troschel.

To request a Condition Report, please contact dipintiantichi@finarte.it The department will provide you with a general report of the condition of the property described above. Please note that what Finarte declares with respect to the state of conservation of the assets corresponds only to a qualified opinion and that we are not professional conservators or restorers. We urge you to consult with a restorer or conservator of your choice who will be better able to provide a detailed, professional report. We always suggest prospective buyers to inspect each lot to satisfy themselves as to condition during the exhibition days as indicated in the catalog.